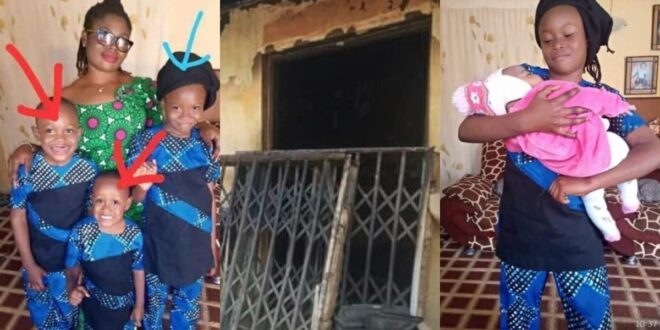 According to a tragic story on Linda Ikeji’s blog, a 35-year-old mother and her four children died in a fire that engulfed their home just a few days ago.

Ebere Precious and her four daughters, Rejoice, Merkel, Harmony, and Engel, were killed in a deadly fire house fire in Jos, Plateau state.

The children died immediately, while their mother was rushed to Bukuru’s Dee Medical Centre, where she died the next day.

The cause of the fire is yet to be determined, according to the website, although it has been suggested that it was caused by an electrical fault.

According to records, the fire was so intense that almost everything in the building was burned.

Philip Ogbodo, the husband and father of the girls, confirmed the story, saying the incident happened on Thursday night, an hour after he left the house to watch a football match at a nearby viewing center.

Meanwhile, the mother and children will be laid to rest in their hometown of Ndiagu Amodu Awkunanaw in Enugu State’s Nkanu Local Government Area on Thursday, March 4, 2021.