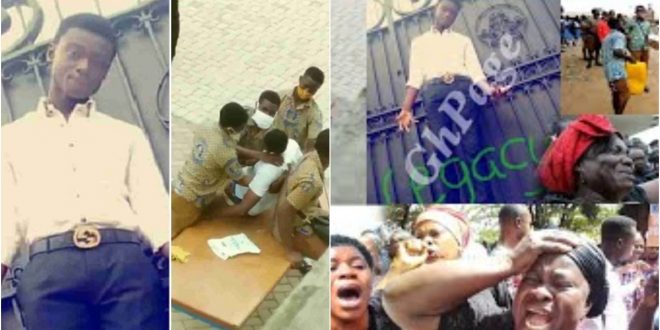 The Mother of Richard Sam, the boy who died at KNUST SHS on Tuesday has finally opened out to how her son suffered before giving up.

as we reported earlier, Richard Sam, a student of the KNUST SHS lost his life after teachers neglected him and left in the hands of friends when he got sick.

well, Comfort in her narration on Angel102.9 FM on Wednesday, disclosed that his son was an ulcer patient.

Not forgetting Sam has been a day students for the past two years and had to join the boarding students after schools were re-opened for final year students in the midst of the coronavirus pandemic.

well, according to Sam’s mother she even visited his son on Sunday the day before he got sick but the securities didn’t allow her to see her son due to the restrictions given by the government.

“I was prevented from seeing my child on Sunday, just a day before the incident. The security men at the gate drove me away like chicken,”

according to Madam Comfort, her son got sick in the morning but the school authorities watched till sunset before they call and informed her.

“They could have taken him to the hospitable which was close to the school,” she said.

they took Sam to the hospital after they got to the school and bought all the drugs he needed but unfortunately he gave up the next morning.

apparently the Head of Kwame Nkrumah University of Science and Technology (KNUST) Senior High School, Felicia Asamoah Dankwaa has been interdicted due to the issue that has disrupted academic work on campus.