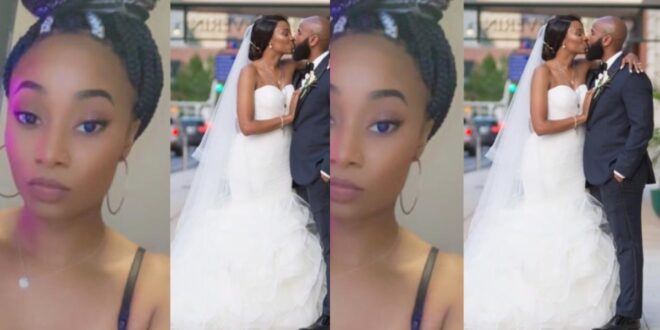 According to a lady identified as Abigail Jones, you can have s3x on your first date and yet develop a friendship that leads to marriage.

Abigail Jones posted a stunning wedding photo on social media, announcing that she slept with his husband on their first date, but that they are now together.

Contrary to common thought, she was saying that having s3x on the first date would also lead to a fruitful relationship.

Although many women are afraid of being taken for fools if they have s3x on the first date, the tale of Abigail Jones might assuage those fears.

S3x is rarely mentioned on a first date, especially when the man and woman are only getting to know each other.

Men: a woman who fucks/sucks on the first date not wifey material

Me, who fucked on the first date:

now I’m a housewife and dog mom who’s about to have a master’s degree. Yall be easy though lmaoo

I gotta mute this now — It’s blowing up my notifications

Moral of the story: We grown. Fuck who you wanna fuck or wait if you wanna wait. Do what works for you! Just don’t let anyone use that to determine whether or not you deserve respect/commitment.

here are some reactions;

Becca Rex commented: Men love to say shit like this as if they’re not the ones women are f*cling on the first date. honestly, we’re not trying to be wife material, we are trying to get laid.

Melissa wrote: Ladies it worked for HER doesn’t mean it will work for you. More often then not when you spread the Cheeks after that dinner he will stop pursuing you because he got what he came for. Again, it worked for her let’s NOT Normalize this. But there is no one process to this. Congrats

Love wrote: Fellas, just because she fucked you on the first night doesn’t mean she doing that to everyone, believe that

Kev wrote: Because you get married doesn’t mean you’re “wifey material”. It’s just an hour visit to the court house and a party, doesn’t validate any worth.

Ryan wrote: If withholding sex (when she wants to do it) is part of your wifey criteria. Don’t be mad when you get a wife that doesn’t want to have sex. She chose to have sex with you early & if that’s bad, what do you think about yourself?

Nejas wrote: Never understood this logic. Sir? Aren’t you ALSO fucking on the first date? We gotta shake that mentality that women “give up” sex and men “get/take” it. It has slight rapey connotations. FUCK WHO YOU WANT. WHEN YOU WANT.

ALSO READ  My boyfriends d!ck is too long and big - Lady cries for help
Share