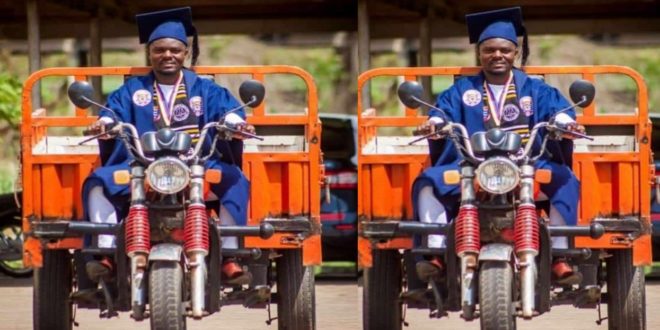 Indeed reaching higher education is not reserved for only those with a wealthy background and it has been evident by Kofi Adjei Fosu.

Kofi Adjei recently graduated University of Cape Coast (UCC) and his journey in getting where he is now, was not on a silver platter. He founded himself throughout the school with monies he made from riding a local tricycle.

He gained admission into the Faculty of Law at UCC as one of lucky sixty-three successful applicants in 2017 and for the three years of his studies, the young man had to combine lectures with selling sachet water in the tricycle to support his expenses.

With all these rough roads and struggles, Kofi Adjei Fosu managed to focus on his studies and graduated with a GPA of 3.4 out of 4.0. Well, it has been confirms that with the 3.4 GPA, Fosu became the best graduating student of Law of Taxation.

Sharing his story on 3news, the graduate revealed he desired to be a lawyer because his life experiences and interaction with people makes him believe law as a phenomenon can be used to engineer social change and to impact upon the lives of the vulnerable in the society.

In the interview, he recounted how money to pay for his admission and also to buy his tricycle. “Gaining admission to UCC Law School, came with huge financial constraint. I had to borrow money to pay the admission fee which was in the region of GH₵8,549.00,”

Fosu added that “to pay for the loan and to also provide for the subsequent two years fees, I had to resort to the use of tricycle which I had also borrowed money to buy, to use in selling sachet water to students on campus”

Meanwhile, this isn’t the first time Kofi Adjei Fosu is graduating as he indicated that he already had his first degree from the Kwame Nkrumah University of Science and Technology (KNUST) before being admitted to do law at UCC.