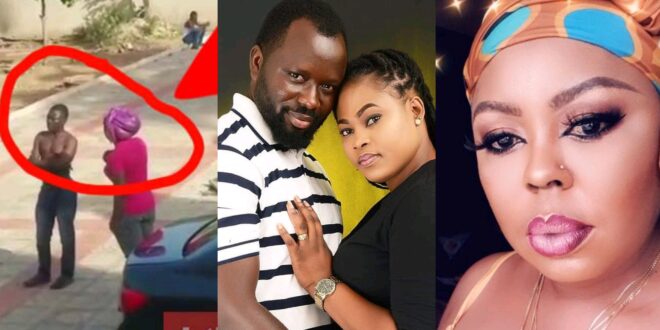 One thing that is very noticeable with celebrity marriages is that most of them do not last, it has become a normal part of our society, and that we are not surprised when divorce comes in celebrity dating or marriages.

Gospel musician Joyce blessing’s marriage with her manager Dave Joy collapsed in the latter part of 2019.

Even though the truth about their divorce is not known in the public domain, it was clear that all things were not well in their marriage because of the aftermaths of insults and fights that came.

Queen of Ghana Comedy Afia Schwarzenegger has revealed that the villain of the divorce story was Dave Joy.

Speaking on united Showbiz on UTV, she revealed that, Dave Joy came to her house at 10 pm crying like a baby after Joyce left him.

Afia Schwarzenegger did not reveal what they discussed, but in the interview, she revealed that Dave Joy was just like her ex-husband Abrokwah who was an opportunist and took advantage of her love for him.

Watch what Afia said below.