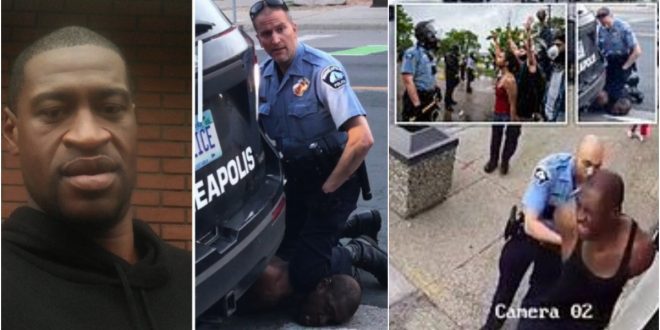 Heartbreaking: Black Man Killed By An American Police Officer Who Knelt On His Neck Till … – Video

A video sighted by us which has fast gone viral indicates how the American Police officers treat the black men in the United States.

in the video, the Blackman identified as George Floyd was killed by a Minneapolis police officer who forced his knee on his neck to the ground on Monday 25th May 2020.

George in the video was heard telling the officer he can’t breathe and that he is chocking but the Officer kept on forcing his knee on Gorges’s neck.

“I can’t breath”, “My stomach hurts, my neck hurts, everything hurts,”

from the video, bypassers also intervein and told the Officer to release him as George is suffering, the Police Officer never mind them and kept on pressing his knee on George until he stopped moving.

he was then pronounced dead on the arrival when he was rushed to the hospital.

the FBI is into more investigations while the Officers involved are all fired.