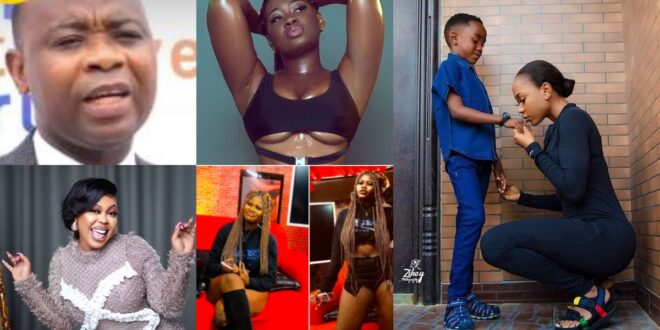 “After Akuapem poloo, We have a list of celebrities we will be sending to court over nud!ty”- Child Rights International Ghana

In a recent interview, he confirmed that his organization has profiled the profiles of most Ghanaian celebrities and that they will be heading to court very soon.

“Once you involve a child in that process, Child Rights will come after you and that is what people must understand. We didn’t send the lad(Akuapem Poloo) to the police station because of her nudity. But once your action directly or indirectly affects a child, they should expect to see us irrespective of who you are.” He stated

“We have profiled most of the celebrities accounts and we have seen the way and manner they are dealing with their children and very soon, some of them will be put before the court” Bright Appiah added.

Bright Appiah had already said that he did not want Akuapem Poloo to be imprisoned.

He claims he tried many times to resolve the case outside of court.

He went on to say that he wanted Akuapem Poloo to set up a fund for her child worth 60,000 Ghana cedis, and that when she did not come up with the full amount, his organization stepped in to help her after Poloo was only able to raise 6,000 cedis.

The attempt fell apart when her current counsel and manager contacted them and stated that they do not believe the lawsuit would go forward and that they are unable to continue with the agreement.

That was the degree of which they were able to co-operate, he said.

Mr Bright Appiah acted after his organization determined that the picture uploaded by the actress Rosemond Alade Brown was an outright violation of her child’s rights.

Following the registration of the lawsuit, Akuapem Poloo was called to the Police Criminal Investigations Department’s headquarters and was eventually arraigned in court after preliminary investigations.

After coming out to clarify the idea behind the picture, Akuapem Poloo took it down and begged the public to forgive her while crying.

Child Rights International then requested that she issue a formal apology to the general public for publishing the picture.

Poloo’s artistic impression explanation did not add up, and the matter was sent to a court of law to be tried.

Authorities from the CRI and social welfare ordered the actress to publicly apologize, but according to sources, Akuapem Poloo’s management was arrogant and prevented her from doing so.

In a related development, Rachel Nana Adwoa Appoh, the former gender minister, says Nana Ama Mcbrown should have been imprisoned for kissing her daughter.