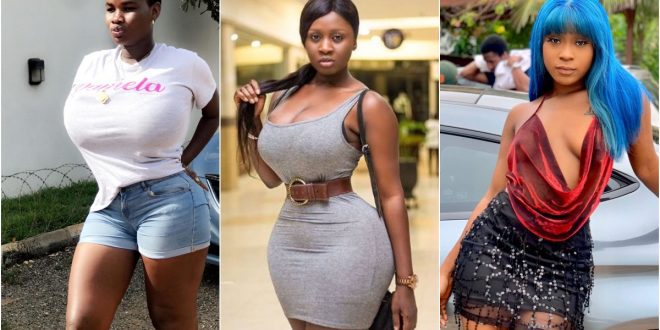 5 celebrities who became famous because of their body (photos)

Many of our celebrities came into the limelights after they exposed their body parts or naturally have huge goodies that people crave for.

Some so called actresses are well known for their body parts than their talents.

below is a list of 5 celebrities who became famous because of their body.

2. Moesha Boduong
Actress Moesha has accepted the fact that her only talent is her big butt.
Despite branding herself as an actress, Moesha have not played any major role in movies.

3. Princess Shyngle
Gambian Born Ghanaian Actress Princess shyngle also came into the limelights with her tiny waist.
Many people claim no one can naturally have such a waist and for that matter she has gone under the knife.

4. Efia Odo
Efia Odo got her fame from the crazy nudes she has been posting on social media.
she was the pioneer of the modern age style of going naked for fame.

5.Akuapem Polo
Known in real life as Rosemond Alade Brown, Akuapem Polo became famous after she was spotted almost naked at the 2018 VGMA awards.
since then, she has been able to build her brand with nudity.