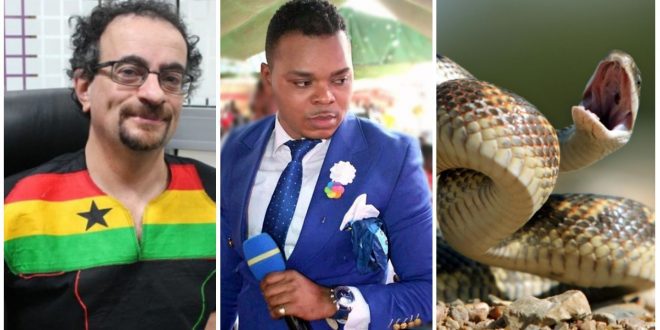 Former British High Commissioner to Ghana, Jon Benjamin has once again poked his nose into the affairs of Bishop Obinim as he usually does. this time he reacts to Obinim’s arrest by mocking him saying he should escape by turning into a snake as he claims.

Founder and general overseer of International God’s Way Church, Bishop Obinim was arrested a few days ago following the violation of the social distancing order that was passed to see to reduce the spread of COVID-19. Upon his arrest, the man of God suddenly fell sick and couldn’t walk again and was quickly rushed to the hospital with a police escort.

Reacting to Obinim’s arrest, Jon Benjamin mockingly advised Obinim to turn into a snake and escape from the police custody as he claims of having such a power.