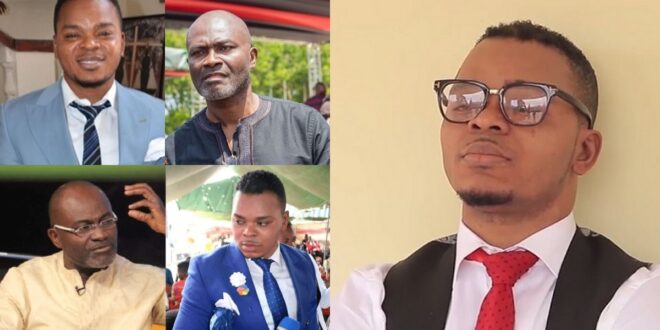 After failing to cure his sick parent, outspoken Ghanaian Member of Parliament Kennedy Agyapong claimed that only fools will try to visit the church of Famous Man of God Bishop Daniel Obinim for healing.

The Hon Member of Parliament for Assin Fosu emphasized that if the man of God’s power is strong, he might have cured his sick father with his power, preventing him from dying.

He said that Bishop Obinim’s deceased father was not only ill, but also bedridden for many years, implying that Obinim lacks any healing abilities.

The member of parliament said that the government would act quickly to crack down on those pastors and other fetish priests who have taken over Ghanaian television screens.

ALSO READ  "If a lady sleeps with her brother In law; it is not cheating"- Pastor Veronica

He believes that much of Ghana’s youth are lazy as a result of the bogus pastors and fetish priests who convince the younger generation that there are simple ways to earn money.

“Now that Obinim’s father is gone, do not you realize you are a fool if you go to his church? He claims to be able to cure you, but his father is no longer alive.

Why didn’t Obinim cure his father since he appears to have abilities and can heal you of your illness? This is a straightforward issue to pose yourself.

Act hard, go out and work, and you will be able to avoid relying on oils” Kennedy Agyapong said.