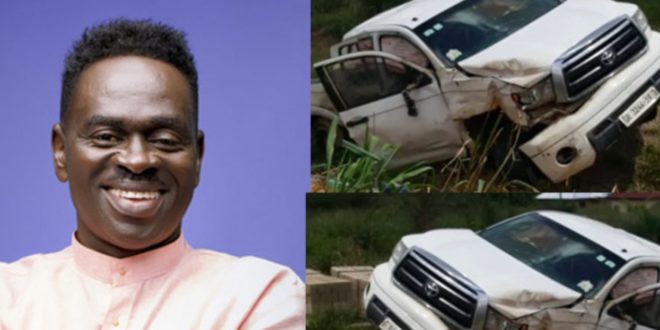 Yaw Sarpong opens up on the fatal accident He Just Escaped

Legendary gospel musician, Yaw Sarpong has in an interview with Zionfelix has recounted how horrifying his recently near-fatal accident he had a few weeks ago was and also circumstances that led to it.

According to the musician, their car ended up in a ditch after it somersaulted three times. Yaw Sarpong said he couldn’t fathom how the occupants of the car survived the accident as there were no casualties.

The legendary musicians spent the entire interview on the uncut show giving praises and thanks to God for his life and all those who were aboard the vehicle including his third son – whom he identified as Jordan.

Yaw Sarpong revealed that all he could remember was a long vehicle veered into their lane which could have led to a head-on collision.

However, their driver managed to swerve the collision and it landed them in the ditch which was more preferable compared to the head-on collision which could have been deadly.

He revealed that his lead vocalist, Maame Tiwaa had her shoulder dislocated, coupled with a cut on the forehead among other injuries to her body. Mr. Sarpong also said he had minor pains in parts of his body including his waist but all victims are responding to treatment.