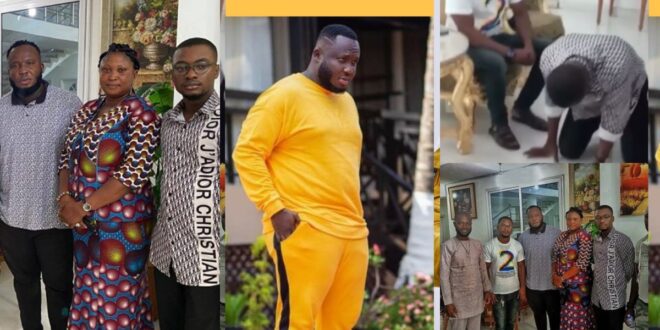 Yaw Berk, a Ghanaian musician, and his mother kneel down to ask for forgiveness from Highly Spiritual Records CEO and producer Kaywa after he disrespected him and abandoned his label.

Two years ago, Yaw Berk talked ill of the seasoned producer, his staff, his studio, and also claimed he was sleeping with rats in the apartment he was provided by Kaywa.

Yaw Berk, speaking on Citi TV, said that he just wants to apologize to Kaywa, but what is hard for him is how to meet him.

Well, Yaw Berk and his mother were spotted at Kaywa’s residence in a new video posted on Kobby Kyei News’ Instagram page to ask him for forgiveness.

In the video, along with some other people, Yaw Berk and his mother are seen kneeling down to beg Kaywa to forgive his son.