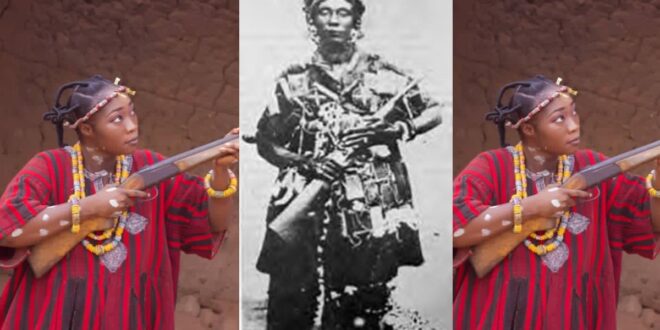 Yaa Asantewaa’s granddaughter has dropped a photo to honor her and how she fought for Ghana.

We are in Ghana month, and Ghanaians are celebrating it despite the presence of a novel coronavirus in the climate, which is disrupting the country’s economic activities. Ghana has a story to share of how our forefathers fought diligently to liberate our country from colonial rule. The colonial rulers came to Ghana with the purpose of infringing on people’s freedom and enslaving us. People including Nana Yaa Asantewaa, Osaagyefo Dr. Kwame Nkrumah, and the other members of the Big Six stood on the ground to free the country from the masters’ grasp.

Abena Sikapa, also known as ‘Lindex,’ a native of Ejisu, which also happens to be Yaa Asantewaa’s hometown, has posted a photo online that is creating a stir. According to her, she chose the outfit to remember how her grandmother Nana Yaa Asantewaa, a warrior, led a battle that resulted in victory because we are in Ghana month and she is a native of Ejisu. She is doing this in order to restore our nation’s history and heritage.

This will assist in educating our descendants about the nation’s past and how some of our forefathers were heroes to the point of dying to protect the republic. She mentioned that she would never throw away the rich culture and customs, but rather will highlight them for us to see and know that we do have something.

Take a glance at the pictures of her below: