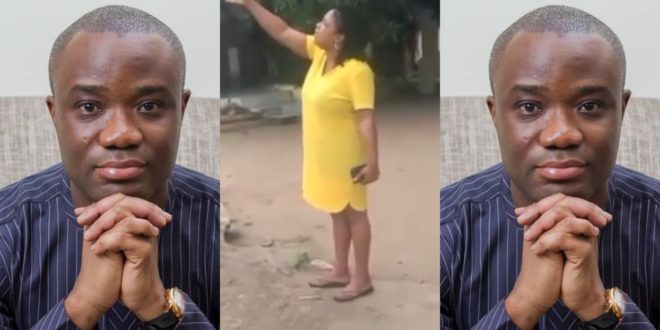 Woman Who Caught Kwakye Ofosu In the sex scandal, Invoke Curses On Him For Denying – Video

The reaction from the former deputy Information Minister, Kwakye Ofosu over his recent sex scandal has incurred more problems than initially.

His reply to the sex scandal incident has gotten the woman, who caught him and also claimed he was sharing the lady’s bathroom, invoking curses as Kwakye Ofosu has come out to denied the allegations.

Well, according to the Hon. Felix Kwakye Ofosu in his reaction, the incident happened last year and that he was to pick up some donation items he left at the lady’s residence only to be accused of something he knew nothing about.

ALSO READ  "We did not come to play"- Jackie Appiah says as she slays in a new outfit.

“I kept the items for my primaries at the ladies’ house,” he said. “Some hospitals beds and 1,200 pieces of cloths. I didn’t have space at my place.

However, in stressing her allegations, the said woman who caught Kwakye Ofosu has invoked curses as captured in anew video. According to the lady, if she made false allegations as the MP claims then the gods punish her and vice versa.