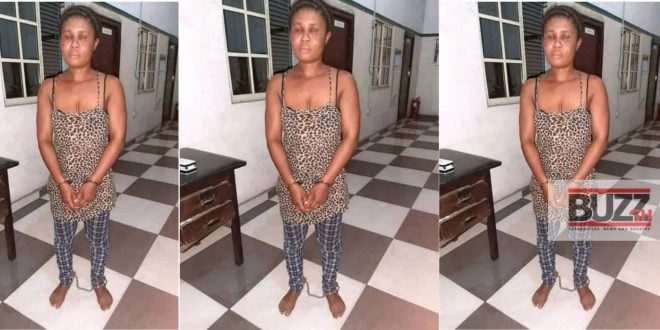 Woman arrested for beating her 10 years old stepdaughter to death for stealing plantain to eat.

A woman have been apprehended by the police for killing her own step daughter for stealing plantain to eat.

Preye, the deceased girl was said to have endured maltreatment from her step mom for a long time now.

The incident was said to have happened at Bori Camp in Port Harcourt, Rivers state.

The suspect, was 2 months pregnant and could serve a long sentence in jail.

Asked if the girl have been stealing anything aside food from her, she disclosed that she didn’t.

An eye witness spoke to the media.

“The woman that killed this girl is a step mum and its Preye’s mother that was the first wife but had problem with her husband and moved out of the house, leaving her three kids behind.”

Preye’s teacher confirmed that she knew the deceased girl had been suffering maltreatment as she came to school every morning with fresh wound on her back.

may her soul rest in perfect peace.