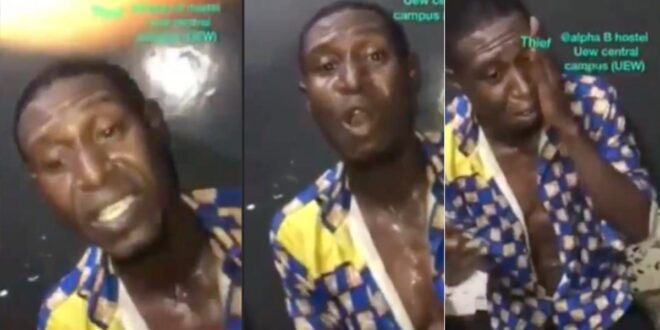 After being caught by students on the central campus of the University of Education, Winneba, a thief’s singing talent was put to the test.

These Alpha B Hostel students persuaded this unfortunate criminal, who appears to be in his late twenties, to sing hymns and other songs he enjoys while recording the act.

This comes after students on the University’s central campus have been expressing their displeasure with the actions of school robbers and burglars.

When they are not there, these robbers either take their belongings, try to kill them, or break into their rooms to steal their valuables.

As a result, these students have no choice but to let this scapegoat do their bidding in order to give a clear message to all of these criminals.

ALSO READ  Thief asked to make love to the goat he stole after he was caught.

The robber sung one of the school’s hymns and was getting ready to perform a Shatta Wale song in a coarse voice.