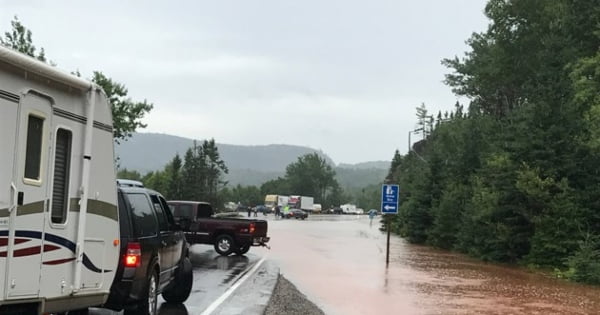 Why is Highway 17 and Highway 71 Closed?

Between Vermilion Bay and Kenora, a portion of the Trans Canada Highway has been closed.

The reason, according to the Ministry of Transportation, is a washout that left a sizable hole in the road close to Richard Lake, roughly 50 kilometers east of Kenora.

When the road might reopen is not specified by the MTO.

In the interim, the water-covered portion of Highway 71 close to Sioux Narrows has been blocked.

There are three places where the road is under water.

Near Berry Creek, fifteen kilometers north of Sioux Narrows, there is a major obstruction.

A little further north of there, close to Maybrun Road, and once more at Old Woman Road, there is just one lane of traffic.

Washout causes Highway 17 and Highway 71 to be Blocked

According to the Ministry, three kilometers of the route are covered by water.

There is no getting around this morning’s closure of Canada’s main east-west route in northwest Ontario owing to a washout that left “a significant hole in the highway.”

According to the Ontario Ministry of Transportation (MTO), Highway 17 is blocked down near Richard Lake and milepost 108, some 40 kilometers east of Kenora. There isn’t a detour, according to the MTO.

The MTO is warning drivers to use caution in the area because both lanes are restricted.

This spring and summer, as a result of the high rainfall, major roadways in Northwestern Ontario were beset by washouts and flooding. A strong storm that passed across the area on Sunday caused significant damage, including at a campground that required evacuation. As cleanup personnel work on the wreckage, more than 500 customers remain without electricity.