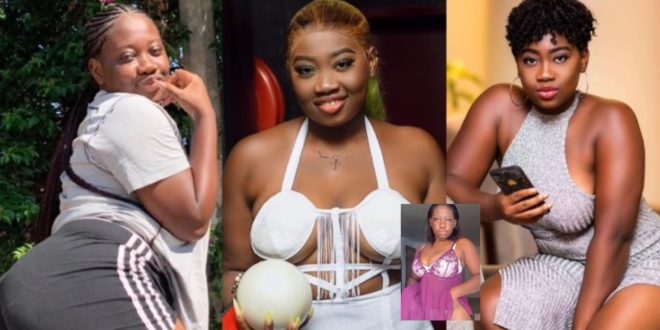 “What i do on social media is different from my real life, i’m a good girl”- Shugatti

Abena Serwaa Frimpong aka Shugatiti, a renowned Ghanaian video vixen and model, has confirmed that the kind of videos and images she uploads on social media is only to solidify her brand, but that is not her real life.

nShugatiti recounted how she ended up becoming a model and video vixen during an interview with Mona Gucci on the link show monitored by buzzgh.com, claiming modeling has been her dreamwork since childhood and because of the rough treatment she got from her mother during her tender age, she was introduced to life earlier and so she started hustling to live her dream and eventually, God introduced her to the nud3 world

She added saying what she does on social media is also her brand and it is what people recognize her for, so she will not avoid doing it, however, the reality that she is a different person and can be attested to by others who are close to her in real life.

She told Mona that she is the kind of girl who does not enjoy sex much, but people see her as the dirty sort with her brand, and she gets several calls every day from men asking for a hookup and other stuff she does not do outside of her social media existence.

She also took a few minutes to clarify that she sells sex toys and gets busy with one of them when she is without a man.