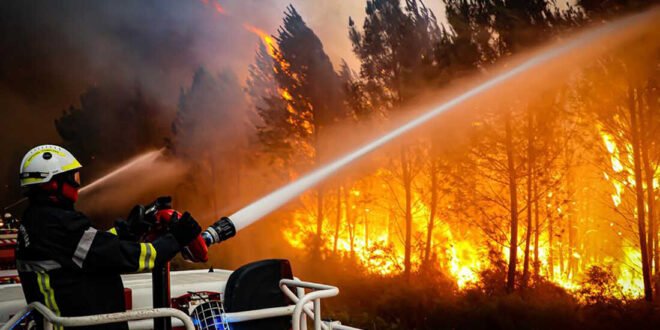 According to local authorities, thousands more residents in southwest France have been forced to leave their homes as a wildfire rages there.

On Monday, about 5,000 residents of Les Miquelots, a southern section of Teste-de-Buch, were advised to leave, while another 3,000 were instructed to vacate Pyla-sur-Mer, to the east.

Rapidly shifting winds have increased the risk of the fire spreading to residential areas that have found themselves in clouds of toxic smoke, where firefighters have been unable to contain the blaze near the Dune de Pilat, Europe’s highest sand dune and a popular summer tourist destination, they said.

Firefighter spokesperson Arnaud Mendousse told the AFP news agency that the smoke was poisonous. “Public health is a question of protecting the population.”

It is one of two big wildfires that have been raging since early last week in the Girdonde region, south of Bordeaux, while regions of France swelter in record heat.

ALSO READ  Check out the picture of Ahoufe Patri and her 'daughter' as she celebrates mothers day.

More than 16,000 people have had to abandon their homes as a result of the fires since they started on Tuesday.

The Forest fires outbreak started on July 12 in the communes of Landiras and La Teste-de-Buch. More than 1,200 people are on the scene putting out the fires.

The flames started during a heat wave that is still going strong and is anticipated to linger throughout southwestern France through at least July 19.

Gironde’s high temperature is expected to reach 41 C (106 F) on July 18. Over the next few days, the hot and dry weather may cause further fires to spread.

ALSO READ  'I wasn't born tall, I woke up one day and it happened"- Ghana's Tallest Man shares his story. (video)

Officials claim that two sides of the situation are stable, but they issue a warning about poor weather on the front-right flank.

More than 3,400 hectares (8,401 acres) of land have been burned in the La Teste-de-Buch communal fire, which is burning in the Arcachon Bay region.

More than 10,000 people who were close to the fire zones were evacuated by the authorities. According to authorities, the situation is not ideal and further fire expansion is still a possibility.