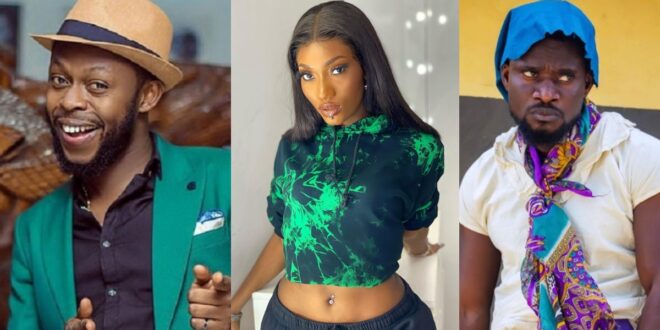 Bismark The Joke and Kalybos, two Ghanaian comedians and actors, are in hot water after appearing in the South African film “Slay,” which is now streaming on Netflix.

The Ghanaian actors had prominent roles in the film, which featured them alongside well-known African actors such as Ramsey Nouah and Williams Uchemba.

The film follows a group of tech-savvy people as they attempt to balance intimate first experiences, first impressions, and romantic opportunities.

Bismark  The Joke takes on the part of a gatekeeper with a permit who lives and works in South Africa. Kalybos, on the other hand, is a Ghanaian who has traveled to South Africa in search of work in order to support himself.

ALSO READ  "My daughter is not a bad girl, all she does is for showbizness"- Yaa Jackson's father speaks (video)

These are some of the movie’s scenes featured the two Ghanaians doing what they do best: entertaining with their comedic acting.

Kalybos was job-hunting and came to a halt in front of the house where Bismark serves as a gateman.

Bismark approached Kalybos and demanded that he obtain a visa before serving in South Africa.

The movie also stars other top award-winning actors from around the continent, as well as a song titled Wrowroho by Ghanaian artiste Agbeshie.

“So, I watched this movie last night on Netflix and my song, ‘All for you’ was featured without my consent or that of my management. Producers of the movie ‘Slay’, it is a crime to use someone’s intellectual property without her consent. Kindly do the needful or i will see y’all in court”.