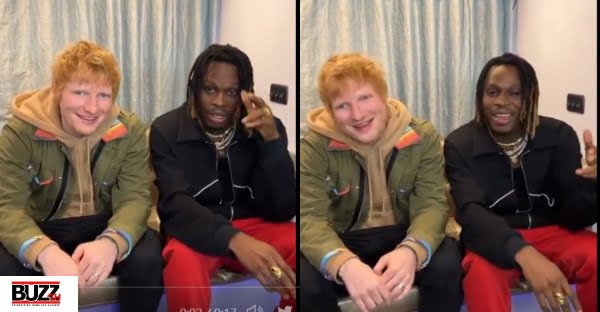 Fans were overjoyed when Ed Sheeran, a British musician, agreed to collaborate with Nigerian singer Fireboy DML, who gave the Yoruba half of the popular “Peru” song.

The Grammy Award-winning singer has previously stated that he will appear on Fireboy DML’s “Peru” remix in December.

Ed Sheeran said this during a 15-minute chat with Elton John on Apple Music’s “Rocket Hour” platform, adding that he’s in love with “Peru” and finds it addictive.

So Sheeran explained how he got to work with Fireboy. “I got his song ‘Peru’ about a week ago to remix.” It was given to me by a friend, Jamal [Edwards], who runs SBTV.

“He said, ‘Fireboy DML would adore you on this song’s remix,’ and I was intrigued.” So I recorded a verse for it, and it’s a song that’s now blowing out in Nigeria and Ghana, where the club scene is still going strong during the holidays. “

So you put a song in the club in December, which seems strange in England. But, sure, I remixed this song, but the original is an earworm, irresistible, and I’m fascinated with it.

“I mean, Cherry will tell you, I’ve had this song on repeat for the past week in the home.”

Ed Sheeran is seen singing in Yoruba in a new video as he and Fireboy prepare to release the Peru remix.