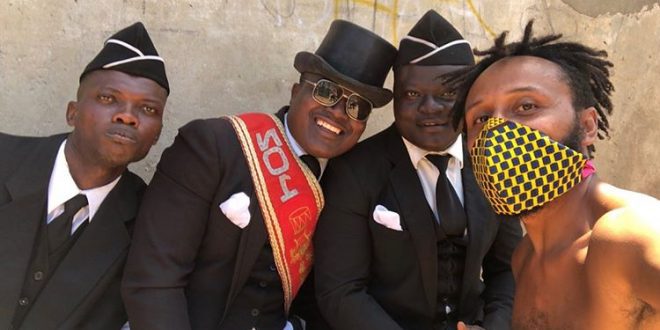 The Ghanaian-Romanian musician and songwriter, Emmanuel Owusu- Bonsu aka Wanlov the Kubolor has been spotted in his recent post spending time with the popular Ghanaian pallbearer Benjamin Aidoo and his crew.

Benjamin Aidoo and his crew of pallbearers came to light after a couple of their videos where they were seen dancing while carrying casket went viral creating awareness campaigns about the coronavirus pandemic.

Though the Wanlov the Kubolor didn’t caption the photo nor revealed his notion for visiting the pallbearers he may be planning on featuring them in a video shoot soon.

Wanlov the Kubolor is noted in Ghana for not wearing pants when he moves about and also believed to be the brother of Medikal’s ex Sister Derby.