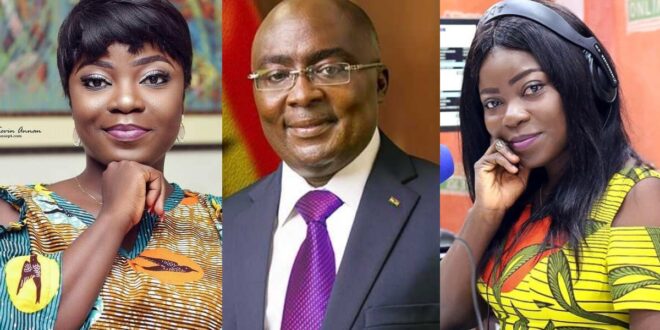 Award-winning Ghanaian radio host Afia Pokuaa, widely known as Vim Lady, suggests that if the NPP wants to retain power, Dr. Mahamudu Bawumia is the legitimate candidate to contest with John Mahama in the 2024 general elections.

“There’s no candidate in NPP that can match ex-president Mahama than Bawumia,”

According to her, the current NPP government should forget to win the election should the NPP hesitate to nominate the Vice President as President Akufo-Addo’s next successor by 2024.

Vim Lady disclosed that Bawumia has promoted itself too well among the prospective candidates who have shown interest in leading the NPP over the past decade while speaking on Okay FM’s Egyaso Gyaso broadcast.

Vim Lady asserted that replacing Bawumia would cost the NPP, referring to his success at the 2012 Election Petition hearing to that of his successful accomplishment in 2008 which earned him the appointment of Vice President.

she wend on to add that should NPP sideline Bawumia “the NDC’s campaign message will be about the NPP using and dumping Northerners. That is the message the NDC will preach and then they will bring in the Aliu Mahama story to buttress it. The NPP needs to field Bawumia if he loses that will be his problem to deal with. Bawumia has marketed himself very well and is the only candidate who can give Mahama a run for his money.”

watch the video of her interview below;