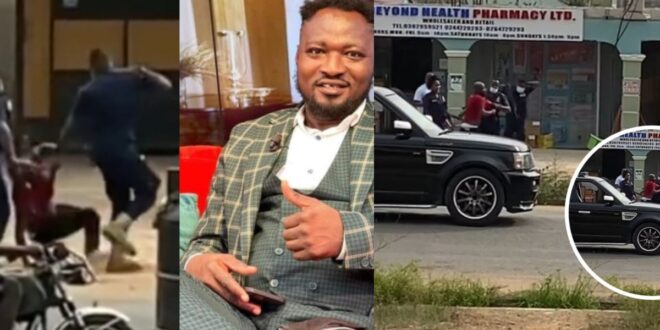 Videos of funny Face been dragged on the floor like a common criminal by police has surfaced.

Funny Face, a Ghanaian comedian, posted on Instagram recently about how he was abused by the police for firing warning shots in the air.

A video of Funny Face being dragged by the police during his way to buy medicine shows he was indeed mistreated.

The most dangerous thing about this is that he wasn’t arrested for killing or damaging property, but he was arrested for firing warning shots at some people during a scuffle.

Funny enough, during the 2020 election period, the same thing occurred when Hon. Hawa Koomson went to a polling station and fired several shots, but because she is a politician, she got away with it.

I may not be privy to the laws of Ghana, but at least I know that you do not arrest someone and manipulate him as if he were a notorious criminal for firing warning shots.

Anyway, watch the video of the police dragging him away and share your thoughts with us.

watch the sad video below.