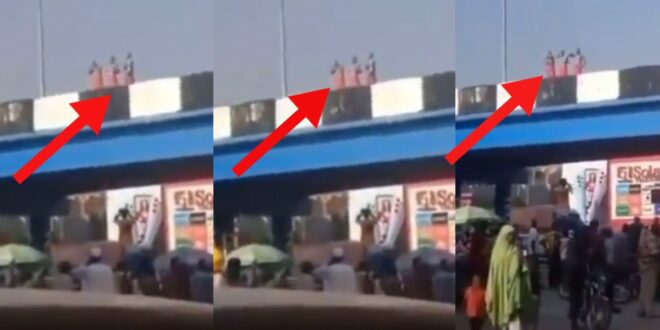 Sakawa practitioners have recently become more adventurous, as they proudly perform their rituals in full view of onlookers.

Three young men dressed in red wrappers were seen taking a bath in broad daylight in a viral video just a few days ago, and the latest story we have here is no different.

These anonymous men with red wrappers around their ankles are seen taking a bath on a bridge in Nigeria in this viral video.

The three men had originally entered with soldiers as escorts, according to a source on the scene.

A VIDEO SHARED ONLINE SHOWS THE MOMENT THREE PEOPLE WERE SEEN BATHING ON A BRIDGE IN BROAD DAYLIGHT.

THE PEOPLE, BELIEVED TO BE MEN, WERE NAKED FROM THE WAIST UPWARDS. THEY TIED RED WRAPPERS ROUND THEIR WAIST AS THEY SCRUBBED THEIR BODY WITH SOAP ON A BRIDGE IN IBADAN.

SPECTATORS GATHERED BELOW THE BRIDGE TO WATCH THE UNUSUAL SCENE.

THE MAN FILMIMG THE SCENE IS HEARD SAYING THAT THE PEOPLE CAME WITH “ARMY” AS ESCORTS.