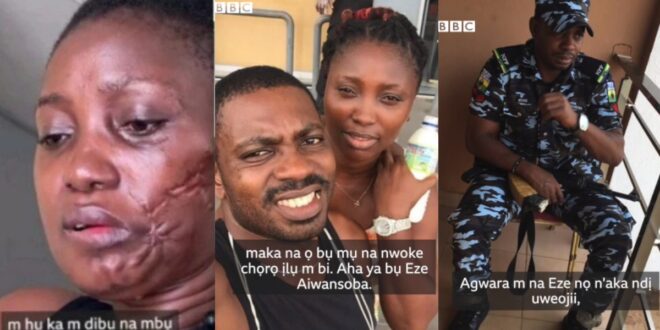 Video: My Police Boyfriend Shot Me In My Mouth -Lady shares sad story

The universe continues to darken, and humans have become more wicked and heartless than the devil himself.

People have entered marriages that they have deeply regretted, and some have died as a result of a single relationship.

This lady is a pretty, attractive woman who is dating a police officer and plans to marry in the near future.

She has often paid frequent visits to her police boyfriend’s house.

The lady recounting her story clarified that one day when she went to see her fiance, who is a cop, he told her that he was tired of their relationship.

Since the lady did not say anything, one day when she was searching for an apartment to rent, this policeman called her and ordered her to come to the door. Though stunned, the lady did not harbor any ill will toward her ex-boyfriend.

ALSO READ  "You don't need to give your girlfriends money, they should work for what they want"- Pretty lady advises men.

When she came to see her boyfriend, there was a confusion, and what she could sense was something passing into her lips, which turned out to be a bullet from a police officer.

This is really wickedness, and the law must deal with the man who has caused this lovely lady to be traumatized for the rest of her life.