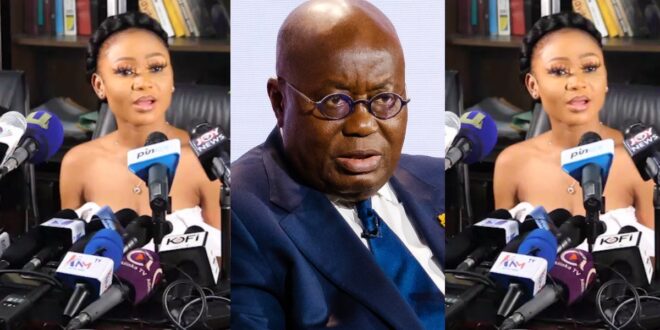 Video: Akuapem Poloo thanks Nana Addo, Attorney General, Celebrities, and Ghanaians for her release from prison

Following her release from the Nsawam Prison, Rosemond Brown aka Akuapem Pollo has expressed her gratitude to President Akufo-Addo, the Attorney General, celebrities, and Ghanaians.

She was particularly grateful for the actions of the aforementioned individuals in ensuring that her bail was approved and that she was released without incident.

Akuapem Poloo, speaking at a press conference today following her release, expressed her gratitude to President Akufo-Addo for intervening in her situation, resulting in her ultimate yet unclear freedom.

Nana Ama McBrwon, DKB, and Tonto Dikeh were among the celebrities named by Akuapem Poloo for their love and encouragement. She also expressed gratitude to bloggers who used their platforms to elicit public sympathy and rally support for his lawyers’ efforts to get her released.