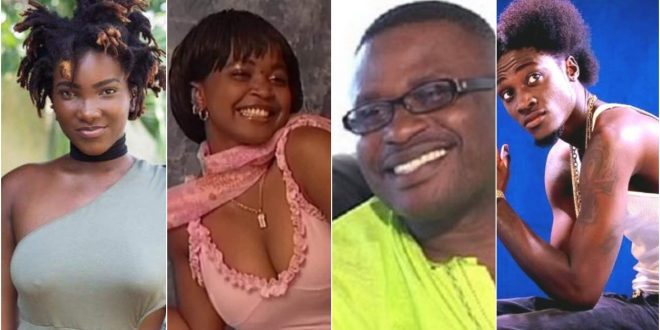 Very Sad: 6 Ghanaian celebrities who died at the peak of their career

over the years, Ghana has lost many vital figures in the various entertainment firels from the movie industry to the music and also the meida. above all, this year happen to be the year that has claimed the most of these prominet figures.

Just last week, Ghana lost two celebrities in a day. Neat FM Presenter Kojo Wiafe and Castro’s manager DJ Amess died on June 4, 2020. At least 9 Ghanaian stars have died since the year 2020 began. This has been one of the terrible years in the creative arts industry. Check them out

what makes it sad is that most of these celebrities were at the peak of their career but couldn’t leave to enjoy the fruits of their labour.

Today we bring you some of these celebs especially your favorite ones who died at the peak of their careers over the years; the age they died, the cause of their death, and some vital information you probably didn’t know.

Castro, born Theophilus Tagoe was one of the leading artistes back in 2013-2014 as he released multiple hit songs with his best friend Asamoah Gyan the then captain of the black stars. His death came as a shock to Ghanaians as it was an accident.

On July 6, 2014,  the news of Castro’s disappearance on the Ada Estuary hit the public. he had gone to party with some friends. Castro’s body was never found, and the police and search team concluded that he had perhaps gone too far into the ocean and lost control of the Jetski leading to him and the unknown lady drowning.

Kwame Owusu Ansah was a leading actor back in the days whose appearance caused a positive impact in the Ghana movie industry due to his versatility. His death also was a shock across ghana from the youth to the elderly since he was loved by all. He died on 2 May 2008 from injuries sustained from an automobile accident on the Tema Motorway in Accra.

reports claimed his Toyota Camry collided with a cargo truck that was being chased by the police. he sustained severe injuries and died after being transferred to the  Korle-bu Teaching Hospital.

Suzzy Williams was a well-known Ghanaian television and film actor. She starred in films such as Bloody Mary, Calamity, The Comforter, and Mother’s Heart. Suzzy Williams died on the La-Teshie Nungua Highway in 2005 at just the tender age of 23.

At the time when she died, she was one of the biggest movie stars in Ghana and Nigeria featuring in all the blockbuster Nollywood and Ghallywood movies.  the promising actress was involved in a gory accident that claimed her life. she was the only one who died that day out of the accident as they were two.

Ebony became the next celebrity to join the long list of Ghanaian celebrities who lost their lives just when they were at the peak of their careers in 2018 when she was involved in a motor accident.

Her tragic death occurred on the Bechem-Nsuta road when she was returning from Sunyani. According to reports, the car in which she was, collided with an oncoming VIP bus which was heading in the opposite direction.

Ebony was the biggest artiste in 2017, releasing several hits. the following year she was to be given an award of the artiste of the year but she couldn’t live to receive it herself.

The Mampi hitmaker lost his life in an accident on the Tema Motorway in 2016. Emmanuel Kojo Quayeson, known in showbiz Vybrant Faya was just getting to the peak of his career and was making strides in the music industry when death took him away.

He died at the 37 Military Hospital while on admission. He was behind hits such as Mampii, Budum-Budum, and Shatta Party. Before his death, he had just been signed to Shatta Movement Family and was just about to make his mark in music. He died at the age of 29, going beyond this life with all his untapped talent and potential.

In the era of Santo, he was the favorite comic actor and even some people claim the current one’s today are no much for him. he stared in many movies with his friend Judas that become hit until he passed away.

According to his bosom friend and movie partner, Abusuapanyin Judas, Santo got ill while they were in Sweden having a European tour. The tour was cut short for Santo to return home for treatment. Santo spent about two weeks in the hospital for treatment upon his return to Ghana but lost his battle against death in May 2002.

Let us help keep their memories still living by sharing.