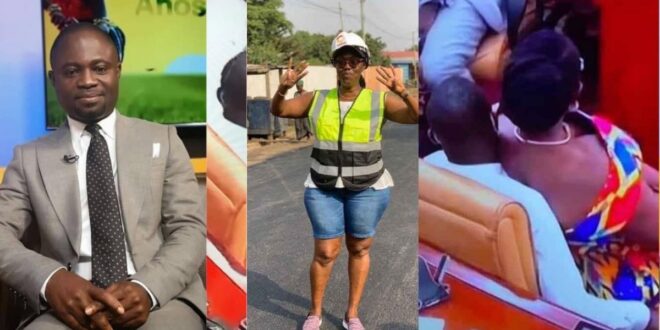 Ursula Owusu in trouble after Hon Akandoh’s wife threatens to sue her for sexual harassment.

Parliament house was a sight to behold on the 7th of January when the old parliament was been dissolved.

One thing that caught the attention of many Ghanaians was when madam Ursula Owusu chose to sit on the laps of Hon. Akandoh claiming he was seated on her seat.

Since pictures came out, Hon. Akandoh has become an instant popular figure in Ghana and has answered questions about what happened on countless radio stations.

In a recent interview, Akandoh revealed that his wife was not happy with what Ursula Owusu did and has threatened to sue her for sexually harassing him.

“ She has threatened to sue her for s3xual harassment.“

He added he did not enjoy madam Ursula sitting on his lap, but he cannot say the same for her who probably enjoyed it.

“I am sure Hon. Ursula Owusu was rather enjoying me whilst she sat on my laps since I wasn’t feeling anything for her,”