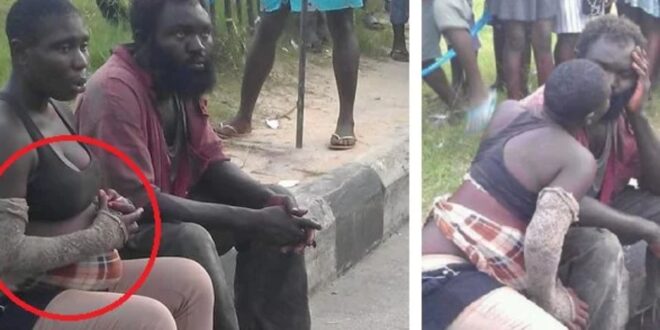 Two mad lovers cause stir as they chop love on the streets. (photos)

Wonders they would never stop is also real as people were put into shock after two mad lovers had been seen in love-making.

Their moment drew a lot of eyeballs to the scene to see if these crazy lovers were engaging in such an act.

As seen in Bayelsa state, a mentally disabled or insane man and woman were seen sitting by the side of the lane, engaged in a public show of affection.

The lovebirds were embracing each other as the crowd watched.

According to Facebook user, Imalah Ugoachanum, the two psychologically disabled pair couldn’t hold back their love for each other.

This created a stir in Bayelsa when they openly began expressing love.