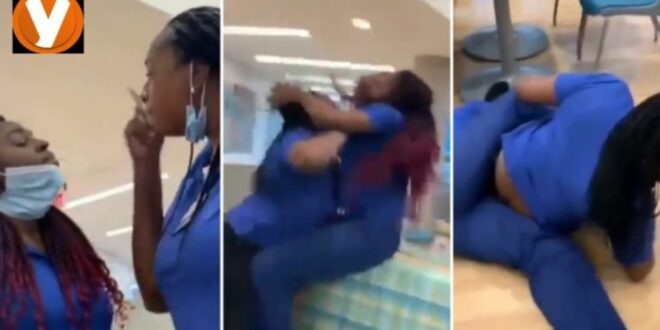 Too bad!! Two Nurses Dirties themselves at the hospital (video)

This is the time two nurses were violent  at the hospital canteen.

In the upsetting film, the pair totally overlooked the social distance rule and discarded their face masks to battle each other in an WWE-style fighting.

The first nurse says: ‘Step over, move over’, while the second nurse says: ‘You don’t want to come over here.’

However, the nurse proceeds to threaten her colleague, triggering a physical confrontation.

They exchange insults and then wrestle in front of thier colleagues in their workplace.

An onlooker begs the pair to break up the fight, saying, ‘Stop your mouth bleeding.’

The video finishes as the nurse who originally choked her colleague, saying: ‘You messed with the wrong person.’.

The video, was allegedly shot in a London Hospital, begins with the co-workers in the midst of a tense argument, although it’s not clear what caused the fight