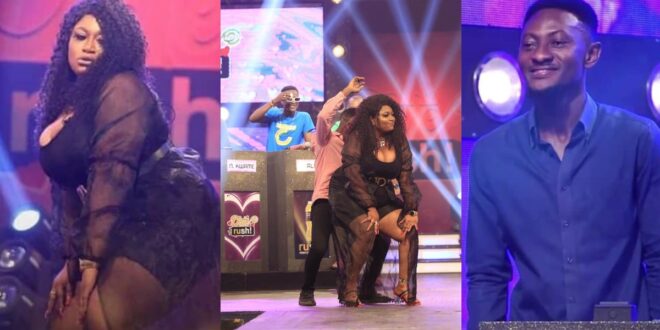 this is the perfect match on date rush, Ghanaians react to Eunice And Fareed – Photos

The fifth season of Date Rush is back, and the fun is still going strong. This time, ten men are lined up as they wait to be accepted by a contestant lady.

The race for a date on Sunday, April 18th, was fierce. When the lady first appeared on the show, I predicted that she would not get a date for a variety of reasons, the most important of which was the fact that she has two children.

Her dance routines, trust level, intelligence, and verve to stand up to the men were all mesmerizing when she first appeared on the stage. She defended herself by standing her ground, and she was very proud of her height and of being a mother.

Fareed was swept off his feet by, I suppose, the qualities I mentioned earlier. He fell in love the moment he saw an eye on her (Enice). He probed her with pertinent questions such as, “Are your children from a single father?”

The question reveals a great deal about Enice’s personality. If the response had been ‘No,’ it would imply that she had an arrogant demeanor and that men would not like to be around her. Again, she despises men and would be content to move on if a man made a minor error. But the reaction was a resounding ‘Yes.’

On the stage, Fareed even made some serious promises. He told Enice that he would not mind giving her one of her kidneys if the situation arose.

Ghanaians were overjoyed for this match as the pair danced off the stage. According to one Twitter user (Ebenezer Mensah),

‘This is the best date I’ve seen since I started watching Date Rush. They really deserve themselves‘