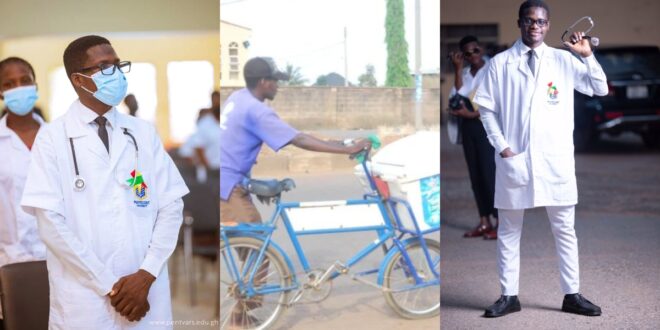 The touching tale of a Ghanaian young man is out on social media, and people are unable to remain silent.

In the past, Adom-ba Lucky used to hawk yogurt on a bike around the streets of Accra.

According to reported accounts, Adom-Ba finished BECE in 2012 but had been unable to pursue his education until 2016 due to lack of funds.

Adom-father Ba’s refuses to be a good father, as he claims from the start that he is not responsible for the child.

To afford additional high school education, he worked as a waiter in an Indian restaurant, and took on acting jobs with the SN Production Crew in September 2016.

ALSO READ  Sarkodie for the first have disclosed what he went through in America because of Coronavirus. (Video)

Currently, Adom-Ba Lucky is a student at Pentecost University, PU, in Sowutuom, Accra, pursuing a Bachelor of Science in Nursing degree with the assistance of the Church of Pentecost, Tema Region.