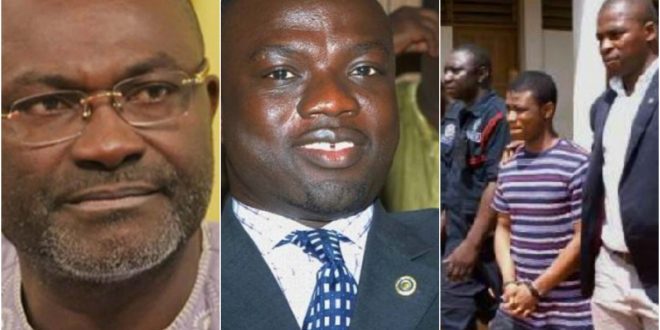 The Suspected Killer Of J.B Danquah Finally Exposes People Who Sent Him – Video

Daniel Asiedu aka Sexy Dondon, the main suspected killer of MP for Abuakwa North, Joseph Boakye Danquah Adu (J.B Danquah) has finally exposed the people who hired him to assassinate him.

Buzzgh.com has sighted a leaked video of Daniel Asiedu confessing that he is the killer of J.B Danquah.

according to the killer, as he narrates the incident, he was approached by an informant Allotey who supplies them guns at James Town near the Club House on the 5th of February, 2015.

Allotey convinced him to do the killing job and claimed it will change his life, he then took him to the people who gave Allotey that job the next day.

ALSO READ  Kennedy Agyapong responds to reports that he has been chopping Yvonne Nelson.

Sexy Dondon disclosed that the people he met mentioned their names as Kennedy Agyapong and Mr. Ofori.

the killer disclosed that they told him J.B Danquah has been killed spiritually and needs to be killed physically so they blame the ruling government then NDC for it.

they took him to a shrine the next day for powers so he will not be caught when doing the act.

they also told him to mention Wayome, Mahama and the NDC’s name when he is being caught so the NPP wins the elections in 2016.

Daniel then pleaded with the NDC to forgive him for lying on them because he is being hunted to speak the truth.