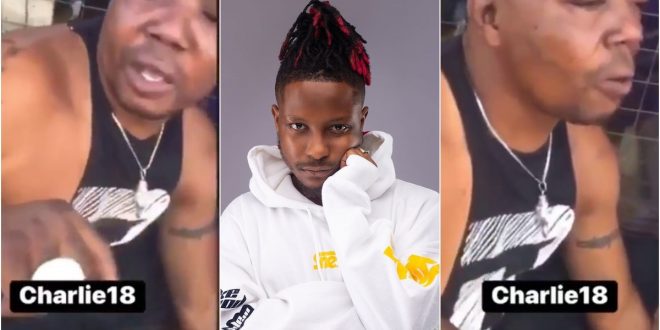 The Man Who Almost Slapped Kelvyn Boy, Finally Explains Why He Attacked

The man who nearly got Kelvyn boy beaten by his gang during his launch of an electronic show, Electroland inside Ashaiman has broke silence on his reasons for leading the attack.

it was recently reported with videos that, the ‘Mea’ hitmaker was nearly mobed by some gang when he went to host a lanching for Electroland Ghana-Ashiama branch. Rumors after that had it that Stonebwoy was the brain behind Kelvyn Boy’s attack and Kelvyn Boy also confirmed.

This got Stonbwoy to release a press statement that evening

Well this morning, a video has popped up which captures the man (many claims is Stonbwoy’s former bodyguard) who led the attack as he explained his motive behind his attack on the former Bhim Nation signee.

according to the man, he attacked Kelvyn boy because he once said in an interview that, he would rather perform at a show that will pay him 1ghc (the actual amount he said is Ghc7) than to perform at Stonebwoy’s Ashaiman To The World.