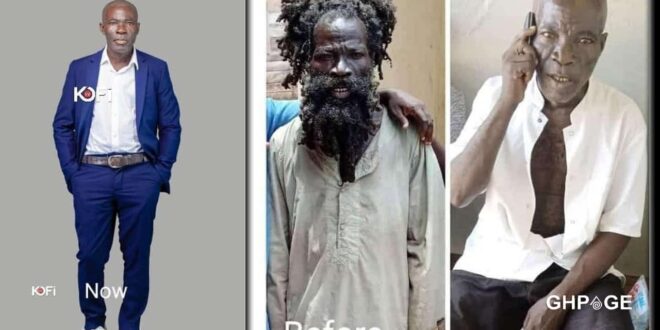 A video of a mentally ill guy mocking Ghanaians and using the local term “Mona Mobl3,” which loosely translates as “you are the ones suffering,” went viral recently.

However, he was discovered by TV host Kofi TV, who turned him into a gentleman.

Many people have been taken aback by the fact that the internet celebrity now appears to be the polar opposite of his old personality, with the current photo giving him a “serious businessman” appearance.

He was dressed in a blue suit with matching blue pants over a white long-sleeved shirt.

On the outside, he appears to be in good shape, but when he talks, he contradicts his outward appearance, as previously said.

As a result, he was questioned if he supported Kumasi Asante Kotoko FC or Accra Hearts of Oak during a recent engagement in the studios of Kofi TV. His reaction, on the other hand, might indicate that everything is not well with Mona Mobl3, the famous madman.

Nonetheless, given his present disposition in comparison to years past, the possibilities of him getting better and healthier with time have increased.

watch his recent video below;