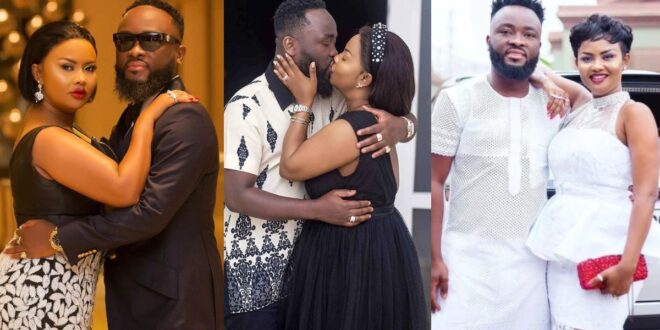 The 10 Most Beautiful Photographs Of Nana Ama And Her Husband

She is a Ghanaian actor, screenwriter, singer, and host of a television program. She is the most well-known figure in the country’s film industry. The Asoreba Twi language film was her claim to fame. The film introduced the Twi language to the Ghanaian film industry, and she is praised for her outstanding work.

Nana Ama is a multi-talented visual artist who is a star in Ghana and beyond, with both lovers and detractors. The majority of her followers are still curious about her personal life and want to learn more about her. Here’s the gist of what we’ve learned about the actress.

Nana Ama McBrown had a brief relationship with Okyeame Kwame, a Ghanaian rapper, in 2004. They were both seen traveling all over Ghana supporting Okyeame Kwame’s solo release during the year.

Nana Ama was enthroned as the Nkosuohemaa (or ceremonial queen-mother of development) of Assin-Basiako near Assin-Fosu in the Central Region of Ghana on July 15, 2007.

You may want to check out the couple’s excellent photographs on the internet.