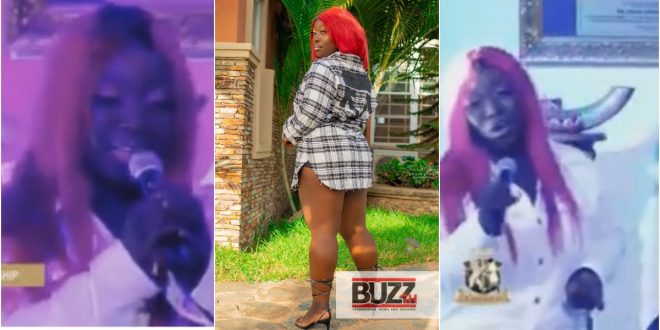 Ghana’s queen of rap, Ruth Eno Adjoa Amankwah aka Eno Barony has caused the internet to shake with the latest video where she was seen leading powerful worship in the church of Rev. Abeam Danso. With this video, she showed her other side to the world and proved she also is religious.

The congregation who were gathered were very shocked and got caught up in the Spirit as Eno Barony took them into a powerful mood. she also touched on how her mum died in her arms four years ago.

Eno came to wider attention when she released her first single, “Tonga”, in 2014, which received commercial airplay. She later recorded more songs including “Megye Wo Boy” in 2015, on which she collaborated with Abrewa Nana.

In 2015, her mother died. After several months of mourning, she broke the silence with hip hop song titled “The Best” with multiple award-winning Togolese artiste and Brand Ambassador for Togocel, Mic Flammez

She has a couple of song with Bullet, Kidi, Shatta Wale and more but non is in the Genre of Gospel as she was seen the video above.

Eno Barony is currently in a lyrical beef with her colleague female artistes Freda Rhymz and Sista Afia.