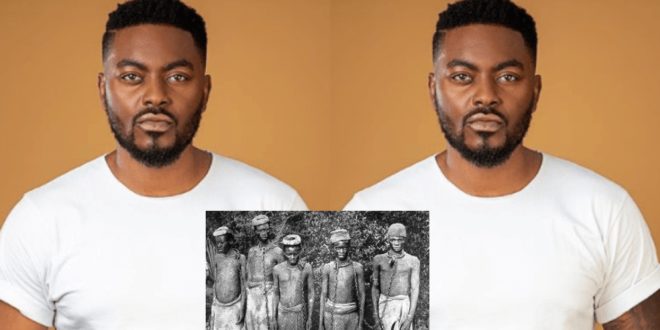 Former Big Brother Africa housemate, Tayo Faniran has advised his fans to stop going to Church on the basis that Africans got introduced to it through slavery.

According to him, Christianity has “demonized” the African practices and beliefs and has also brought about division to the people.

The reality star stressed that Christian prophets are not different from other Africanist that came earlier but we criticized and condermned them though they were also sent by God.

Tayo Faniran aired this view of his in an instagram post where he shared a picture of Hollywood star, Jammie Fox with “Black people hate everything about slavery except Christianity” written on top.

In a lengthy caption, he wrote:

“Stop going to church,God lives inside us, Christianity was brought to us by the slave masters, it divided us, it demonized African practices and beliefs, God is love and Love is God, when you do good you will see God,when you do bad you will see satan.”

Tayo Faniran continue : “don’t let any man lie to you that he is closer to God than you are, know your God and pay more attention to him by yourself and he will never leave you. If we can have half the churches in Africa today converted to halls where we teach African history and studies,it may not take us more than a year to realize most of our problems live in our heads, we have bigger oppression than our individual country governments to break from.”

“Africa has one enemy, just one ,and this enemy lives in our heads, they have fed us with so much information from generations before us to make sure we remain chained in our land forever and religion is one of their major tools they use to play us,stop following and start to ask questions,you will realize that all they will answer you with is ‘you can’t question God’ … who is this god, their god or my God?”

Tayo Faniran went on to say that: “I tell you what, I ask God questions and he answers me, all these happens within me, inside of me. My God is not a poverty loving God, He hurts when I hurt, He is happy when I’m happy, will Mercedes manufacture a car and send into the market without its manual, so since my God created me in his own image, why then should I be made to believe that He had not sent me into this world with my own manual?

“Don’t just keep following,pause and ask questions,trust me it’s clearer than you think,all you have to do is just think.If one religion encourages poverty and more poverty while the other preaches freedom and liberation,which would you choose?”

“Fela and other Africanists that came before us weren’t different from other prophets that were imposed on us, many things they said before are happening now, why are we not listening to them? Even though they demonized and criminalized all of them, yet we can’t forget their words, God sent them too.

“Who legalized cigarette (artificial killer) and demonized marijuana (natural healer/drug) ,who condemned the use of herbs and replaced it with chemicals?” Tayo Faniran finally quizzed.