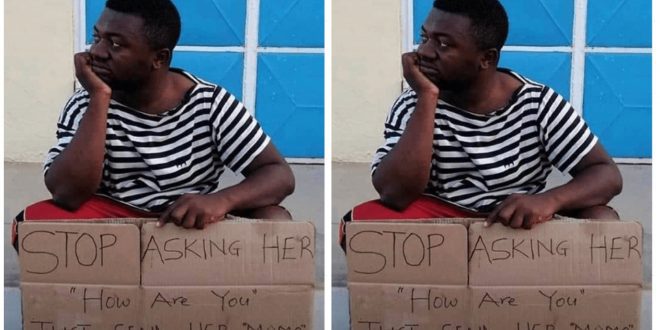 ‘Stop asking your girlfriend how are you? just send her momo and she’ll be fine’ – Man Says

An unnamed young man has caused confusion on social media by insisting that men should rather send sums of money to their girls on their mobile phones (popularly called MoMo) instead of asking them, ‘How are you?’

He shared this suggestion of his in a picture where he was seen holding a placard with that got writings on it which says: “Stop asking her ‘how are you’, just send her MoMo and she will be fine!”

His message has caused people to react as most claims he is out of his mind. Although it looks obvious that he just wants hype but some users of the internet are not happy he is displaying what they call ‘stupidity’ in broad daylight.