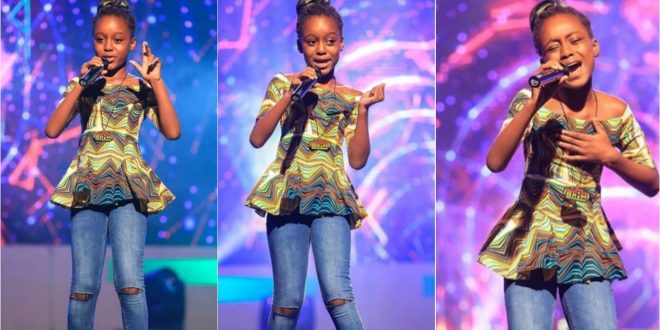 The 2020 edition of TV3’s Talented Kids seasons 11 has finally come to a successful end last Sunday.

dancehall singer Stonebwoy’s daughter Stonegirl won the 3rd runner up position with a massive performance on the show.

Oreila Quartey as she called in real life performed Stonenwoy’s song and singer Efya’s song at the grand finale.

Stonegirl took the fourth position which is the same as the 3rd runner up after her performance at the grand finale didn’t impress the judges.

she took home a grand prize of GHC3,000 cash prize, a one-year educational scholarship, GHC500 worth of prizes from Indomie, and products from other sponsors.

though Stonegirl has massive support from Stonebwoy, she couldn’t win the first prize.

see her photos and video below; swipe left for more..