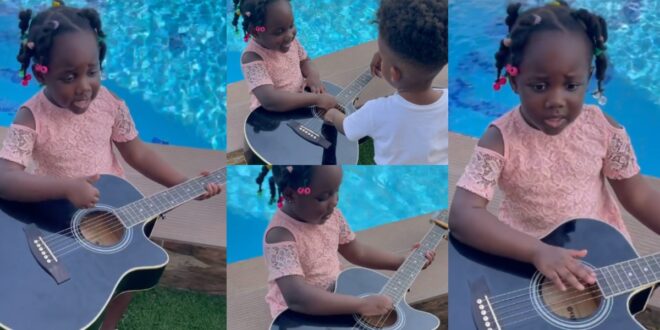 Jidula is seen in the video hanging out with her brother, Janam, at their home.

Jidula is seen seated by their pool and playing an acoustic guitar on her lap in a recent video spotted by Buzzgh.com.

When learning to play the guitar, the little girl sings “head, shoulders, knees, and toes.”

Jidula’s brother confronts her where she is sitting shortly after and supports her in ‘playing the guitar.’

ALSO READ  Ghana's sexiest Policewoman, Ama Serwaa is out with some breathtaking Photos

They were later assisted by an adult who teaches Jidula how to piece together a pattern on the guitar.

The video was first posted on Jidula’s Instagram profile, with a caption announcing that she would be recording a song with her father.