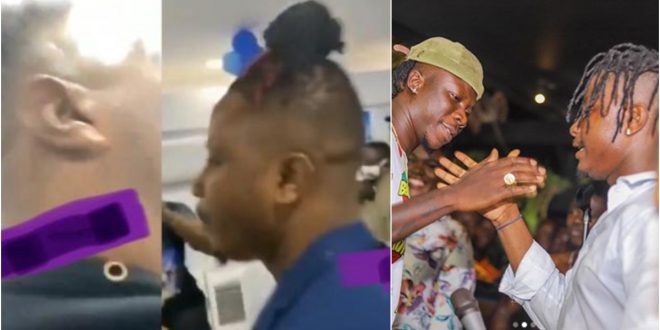 The CEO of Burniton Music Group, Stonebwoy has finally reacted to Kelvyn Boy’s Attack at Ashiaman.

as we reported earlier, former Burniton Music signee, Kelvyn Boy was attacked at the Ashaiman branch of Electroland Ghana Limited by a guy which was reportedly the former bodyguard of Stonebwoy.

following series of Tweets, Kelvynboy noted that the person who planned for him to be beaten up couldn’t succeed.

as Stonebwoy’s name was mentioned, he has finally released a statement that indicates that he has no hand in Kelvynboy’s attack.

part of the statement reads;

“For the avoidance of doubt. We state emphatically that we are in no way associated with the alleged scuffle. Further, none of the individuals who are alleged to have been involved in the alleged actions have been and/or are in the employ of Stonebwoy”

read full statement in the screenshot below;