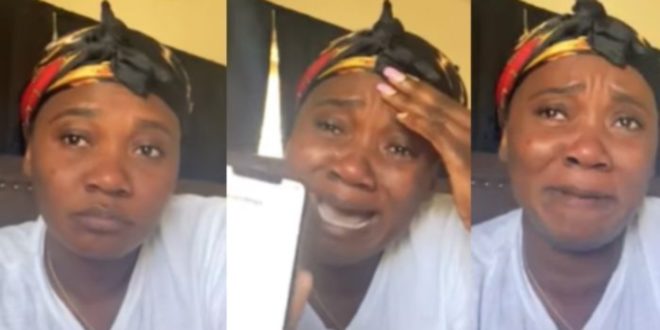 “God Will Fight For Me” – Stella Okyere Who Threw Her Husband Out weeps; says she’s been painted black

A US based Ghanaian woman identified as Stella Okyere has falling into the criticism of social media trolls after a video that captured the moment she drove her husband out of the house went viral.

Following the video surfacing on the various platforms, there have been speculations to explain her actions in the video. a report indicated that Stella sacked her husband, Nana Amponsah Bediako after he failed to pay house rent for two months.

Others also claimed that  her husband is an unemployed drunkard who has been abusing and burdening her.

ALSO READ “Instead of Trolling Me, Use The Energy To Look For Money To Pay Your Rent” – Tracey Boakye slams Critics In New Video

Well, Stella Okyere who is fed up with how the issue is escalation has come out to speak for the first time in a new video we have sighted. She is seen in the video soaked in tears as she rubbishes all claims and false speculations concerning the video.

According to her, friends and family are all aware of her sad story, and she has all the proof about events which led to throwing her husband out but she cannot speak out because she has two kids him.