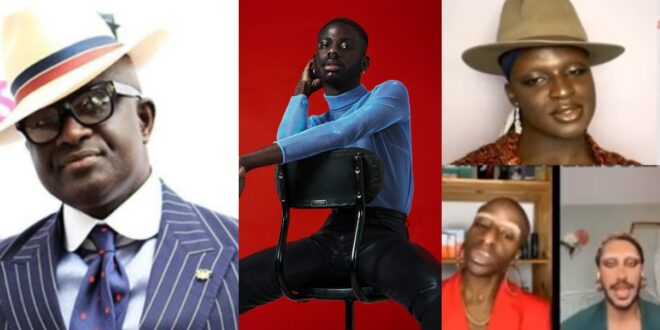 Kwaku Darkwah Kyei-Darkwah, the son of well-known Ghanaian broadcaster Kwasi Kyei-Darkwah (KKD), was seen leading a video call with his gay colleagues to discuss their husbands and other topics in a new video.

In 2017, the young man came out as bisexual, revealing that he had been gay since he was in primary school.

“When I was in primary school, I realized I was gay. When someone mocked me by calling me homosexual, I replied, “So what?” I was cool with it, but others weren’t, and that’s when I began to feel uncomfortable and ashamed of my sexuality. I was constantly hiding under my parents’ shed. When I came home from school, I was exceptionally calm, supportive, and obedient. I spent much of my day in my bed. I was trying to be the “ideal kid” in order to get by unnoticed. It wasn’t until I moved out of my parents’ house that I knew I wasn’t someone or anything I’d met before.”

“I went through a lot of ups and downs, trying out new outfits, new social clubs, and reinventing myself over and over. I know I did that because I was already struggling to fit into a package – the fashionable black man, the hip and macho black man, the femme, flamboyant, and fun black man. None of them succeeded and I (and everyone else for that matter) am so much more than a stereotype. He told intomore.com, “I am now very relaxed with my sexuality because I don’t  have to adhere to any one picture.”

Here is a video of their conversation: