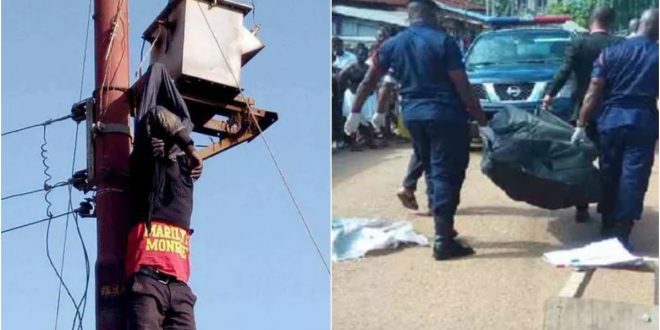 So Sad! 22-Year-Old Electrician Electrocuted On A High Tension Pole At Tema – Photos

A 22-year old man identified as Kofi Owusu has lost his life as he is been electrocuted on a high tension pole in Tema.

from an eye witness, Kofi Owusu was invited to fix an electrical fault on the high tension pole a few hours after the heavy rain over the weekend.

it was discovered that the deceased was wearing a long blue dress without hand gloves as he was hanged on the pole for four hours after he was electrocuted.

with some of his tolls beneath the pole he was hanging on, his lifeless body was then brought down with the help of the police and the officials of the Electricity Company of Ghana (ECG) after they cut power to the area.

Kofi Owusu’s body has been taken to the police morgue as the Station Officer of Sakumono Police Station, Chief Inspector Collins Antwi Kweku Amankwah disclosed that the deceased slipped and hold one of the wires which electrified him as he was without gloves.

photos below shows how he was hanged on the pole.