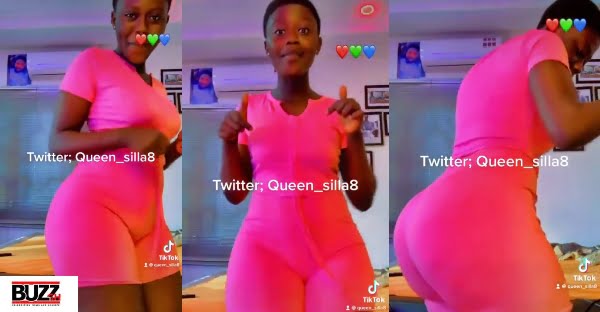 Sometime in October, videos of a  young pretty lady went viral as he was seen swaying what Baba God had endowed her with at the back and hips.

Many individuals who reacted to the videos at the time speculated that if caution is not exercised, the young girl will give Hajia Bintu, who is perhaps the most-talked-about lady whenever a subject about nyash comes up, a run for her money and likely seize the ‘title’ from her.

Well, little has been seen or heard from the young girl known as Queen Silla’s camp in the previous several weeks since she was allegedly at school — that is, senior high school.

ALSO READ  How Becca, Emelia Brobbey and others reacted to Baby Maxin's face

She has, however, resorted to her different social media channels today to post a crazy video announcing her return to social media after school was closed for the Christmas vacation.

Sharing the video, which some have claimed is a challenge to Hajia Bintu, Queen Silla offered the audience a 360-degree spin and flaunted her nyash for a moment. The video was also captioned: ‘Finally back from school, who missed me ?’