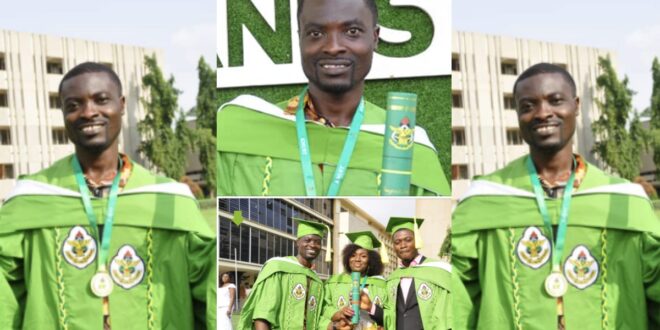 On social media, the story of Debrah Sarpong, a cocaine seller who later became a shoeshine boy, has gone viral.

Mr. Sarpong did all he could to get through school, including selling cocaine in Amakom, a Kumasi suburb, when he was just 12 years old.

He had to leave his job to start a shoe shine company because he was afraid of being arrested by police officers or starting to use the drugs.

He has been able to send himself to school with this money.

He has now graduated from KNUST with a Master in Science in Accounting and Finance, despite all of life’s challenges.

read the rest of his story here:

“At the age of 12, I could hide small wraps of cocaine in matches box and delivered it safely to some guys at amakom without being caught in return for money.

Fearing I could either get caught by the police or be forced to taste the drug one day, I stopped getting closer to the man who used to be the drug dealer.

After that I furthered to UEW-K to pursue Bsc Accounting (Education).

And now I’ve graduated with Master of science Accounting and Finance at KNUST.

I’ve realized God has given each and everyone three tools of creation: THOUGHT, WORD AND ACTION.

Nobody can take them away from u. There would be distractions like hunger, embarrassment, disappointment and betrayal but remain focused. Worry not about where help would come from. The universe will bring them.

Have a positive thought and work towards it.

The universe is just a big Xerox (photocopier) machine. It simply produces copies of your thoughts.”— Neale Donald Walsch

I give thanks to Almighty God, my father, Mr Debrah Sarpong, Mr. Patrick Adusei and Hon. Eugene Boakye Antwi, MP for Subin Constituency for their enormous support”