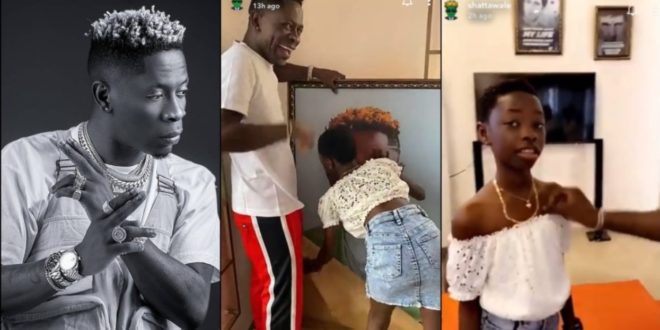 Shatta Wale who is known by the real name Charles Nii Armah Mensah Jr lived the best of his life yesterday October 17th, 2020 as he turned a year old. The Dancehall legend was blessed with the love that was shared unto him by Ghanaians by trooping in on social media to air their wish.

However, among all the surprises and wishes, the one that looked dearer to the Melissa singer is the one from his own father,  Shatta Capo, and his three lovely kids.

His daughter, Cherissa together with the ‘old man’ presented a portrait picture of the dancehall artist on his birthday. Even though Majesty and Jedidiah were not captured during the presentation, they all had hands in pulling up this surprise on Shatta Wale.

Wale was with all smiles and excitement after seeing the beautiful gift presented to him by family.

Early this year (in April), the same gesture was extended unto Shatta Capo (Shatta Wale’s Father) by his son when he was celebrating his birthday. The musician paid his father a surprise visit at his house and he presented a gold necklace to him as a birthday gift.

Shatta Capo expressed his surprise at his son’s gift saying it was the “biggest surprise” for that day because it was unplanned. He later asked for God’s blessings to pour on his son for the kind gesture done him.