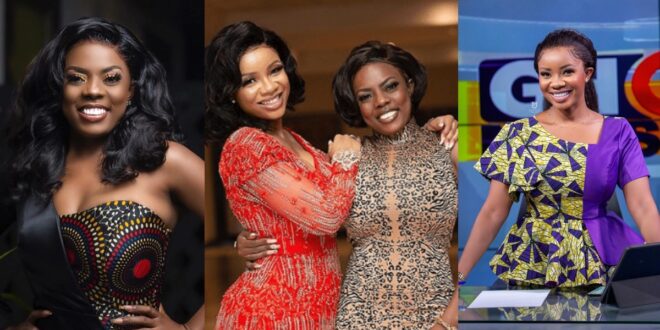 Nana Aba Anamoah warns serwaa Amihere not to lie to young girls about her life.

Nana Aba Anamoah, a well-known Ghanaian broadcaster, has warned her media-daughter Serwaa Amihere not to lie to people, particularly young girls who look up to her as role models.

Nana Aba charged Serwaa Amihere in a social media post to refrain from embellishing or lying about her life story if she has the opportunity to talk on a forum to either share her story or inspire young girls about how she became the Serwaa Ghanaians know today.

Nana Aba Anamoah, the General Manager of the EIB Network, took to Instagram to say, “If you’re presenting at an International Women’s Day event today, tell the young ladies the facts.” Don’t tell them how you got here just to advance an agenda. “Be honest.”

Initially, Twitter users were wary of a simmering spat between Nana Aba Anamoah and her daughter Serwaa Amihere, who works in the newspaper.

However, it turned out that it was Nana Aba Anamoah’s jovial way of wishing Serwaa Amihere a happy birthday on March 8, 2021, as she turns 30 this year.